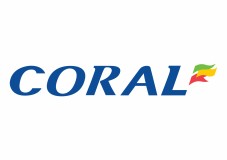 Coral is a bookmaker in Britain, and currently has over 1800 betting shops in the UK as of October 2011 as well as hundreds in Italy trading under the Eurobet name.

Joe Coral began his bookmaking business in 1926, after borrowing some money off of a local cafe owner who happened to be a good friend of Joe's, operating betting pitches at greyhound courses. His great friend, Tom Bradbury-Pratt ran speedway meetings at Harringay and a number of other venues. He, and Joe Coral, went on to establish many speedway and greyhound tracks and Joe was one of the first bookmakers to take advantage of the 1960 legalisation of off-course betting shops and opened his first shop in 1961.

In July 2015, it was announced that Ladbrokes would merge with its rival Gala Coral to form the new company, Ladbrokes Coral.

Ladbrokes plc is a British based gaming company. It is based in Rayners Lane in Harrow, London. From 14 May 1999 to 23 February 2006, when it owned the Hilton hotel brand outside the United States, it was known as Hilton Group plc. It is listed on the London Stock Exchange and is a member of the FTSE 250 Index, having been relegated from the FTSE 100 Index in June 2006.

In July 2015, the company reached an agreement to merge with its rival, Gala Coral Group. Under the terms, Ladbrokes' chief executive Jim Mullen will become CEO of the new company, named Ladbrokes Coral.

William Hill plc is a bookmaker based in the United Kingdom and is listed on the London Stock Exchange.

The company was founded by William Hill in 1934 at a time when gambling was illegal in Britain. It changed hands many times, being acquired by Sears Holdings in 1971, then by Grand Metropolitan in 1988, then by Brent Walker in 1989.

The company operates worldwide, employing approximately 16,601 people with main offices in the UK, Republic of Ireland and Gibraltar, offering betting by phone and Internet together with their 2300 UK-wide Licensed Betting Offices. They are the largest UK operator, representing around 25 per cent of the market throughout the UK and Ireland.